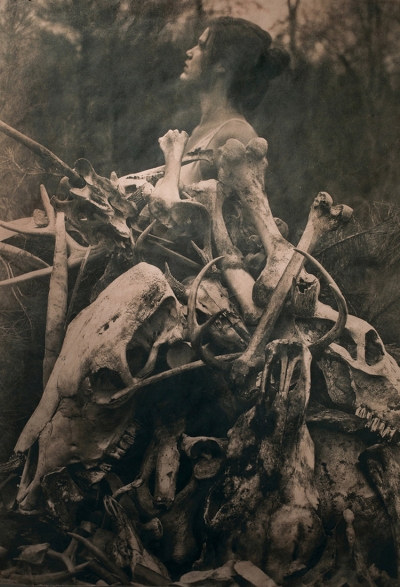 COLUMBUS, Miss.--The exhibition “Intersections of Gender and Place” is on view at the Mississippi University for Women Galleries through Nov. 3. This year, the exhibition series features artwork by Jaime Aelavanthara, Cynthia Buob, Denise Stewart Sanabria and Rachel Ann Wakefield.

This recurring exhibition explores the significance that gender plays in the artwork of southern artists. The project is two-fold: first, to examine potential feminist themes in contemporary art and second, to discover how southern culture has informed the artwork. Two of the artists, Buob and Stewart Sanabria, are transplants to the south, while Aelavanthara and Wakefield are native to this region. All of the artists acknowledge that living in the south has influenced their artmaking and demonstrate the diversity to be found in the region.

“We always look forward to this exhibition because the artists have such diverse approaches to the parameters of the series,” said Dr. Beverly Joyce, director of the MUW Galleries. “This year’s installment is no different. The artwork ranges from Southern gothic to burlesque,” Joyce added.

Most of photographer Aelavanthara’s artwork on display are from her “Untamed” series of cyanotypes, set in the rural environs of the deep South. Through unexpected juxtapositions, Aelavanthara explores what she calls “the intimate relationship of a feral woman and her surrounding nonhuman environment.” The resulting Southern gothic images pull the viewer into mysterious narratives that conjure up decay as well as growth as in “Bone Dress.”

Contemporary life in the Golden Triangle, as seen through the female form, is the focus of Buob’s paintings. Buob has lived in Columbus for many years, and she has featured many locals in her artwork, which she calls her “visual storytelling.” In “The Power of Dog,” for example, Buob depicts two pregnant women, one of whom holds a revolver, along with two dogs and framed by children’s bicycles. This enigmatic scene invites a variety of interpretations; Buob keeps the meaning open. Some of her representations are personal, as in her self-portrait where she humorously captures the story of pandemic-era teaching. She is an art instructor at East Mississippi Community College.

A playful critique of patriarchy is the focus of sculptor Stewart Sanabria’s “The Complications of the Male Gaze,” comprised of large-scale figures drawn on wood. The work draws upon film theory about the passivity and objectification of the female by the male-dominated art form. Stewart Sanabria writes that “In my piece, females get to laugh at the concept.” The figures are realistically drawn from candid photographs, mostly shot at art receptions.

Stewart Sanabria also features secular, cultural altars that challenge gender archetypes and stereotypes, which she classifies as “Contemporary Altars of Misappropriated Mythology.” These meticulously constructed assemblages were inspired by her life-drawing group’s collaboration with burlesque performers in Knoxville, Tennessee.

Wakefield questions the notion of feminine beauty in her photorealist paintings of the suburban southern woman. The majority of her paintings in the exhibition are from her “Underwater” series, in which young women are often seen through veils of rippling water. The water, and sometimes the positioning of the figure, obscures or distorts the figure and in doing so undermines expectations of facile visual consumption of the feminine form.

Located in Summer Hall, Mississippi University for Women Galleries are open Monday – Friday, 8 a.m. – 5 p.m. with extended hours to 7 p.m. on Thursdays. The Galleries are free and open to the public.