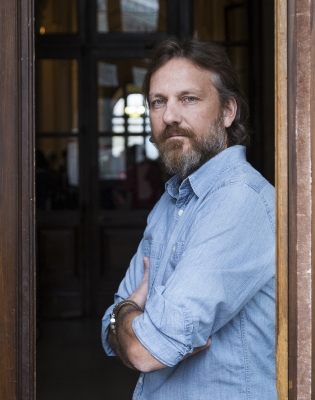 COLUMBUS, Miss.--  Mississippi University for Women faculty member and award-winning author Michael Farris Smith’s latest novel, “Blackwood,” will release Tuesday, March 3. It will mark Smith’s fifth novel in eight years and comes on the heels of the highly-acclaimed “The Fighter,” which was named in numerous must-read lists and caught the attention of Hollywood.

“I did things in Blackwood I haven't done in other novels, in terms of using the unknown, the power of tall tales, the possibility of the supernatural or the just straight-up nature of you know there is an evil lurking but you can't put your finger on to where or what it is,” said Smith, associate professor of English.

“It's also the first time I've had characters from one novel bleed over into another novel, with a couple of characters from “The Fighter” finding their way into this story. Each of my novels has been a unique experience for me, and hopefully for the reader.”

In “Blackwood,” Smith remains in his familiar landscape of Mississippi, this time venturing into the North Mississippi hill country, where a kudzu-covered valley sits on the edge of a small town and delivers ghostly whispers in the night. It is characteristic of all of Smith’s work, tough people in complicated and sometimes overwhelming circumstances, propelled by the unknown, wrapped up in a dark and mythical deep South landscape.

Smith’s most recent two novels, “Desperation Road” and “The Fighter,” have been optioned for film, with Smith screenwriting for both projects. His first novel, “Rivers” is currently being negotiated to be developed as a television series. “The Fighter” which will go by the screen name “Rumble Through the Dark,” is being produced by Cassian Elwes, known for films such as “The Butler,” “Dallas Buyers Club” and “Mudbound.” Parker and Graham Phillips, brother producers and directors, will direct “Rumble through the Dark,” which follows their debut feature film “The Bygone” which released to critical acclaim in early November.

“It's exciting and interesting. It's still storytelling, but it's a different kind of storytelling. Writing the adaptations has been like sitting down in a room with a bunch of old friends and getting to know them again,” Farris said on his novels translating to film.

In addition to gaining the attention of the film industry, Smith’s novels have regularly appeared on best of the year lists, and have been finalists for the Southern Book Prize, the Gold Dagger Award in the UK and the Grand Prix des Lectrices in France.

Dates for the book tour for “Blackwood” are being added, with an event scheduled for Columbus at the Rosenzweig Center Wednesday, March 4.

For more information on pre-ordering for “Blackwood” and up-to-date news on his novels and adaptations, visit michaelfarrissmith.com.