Miller gets MIAL nomination for 'Biloxi' 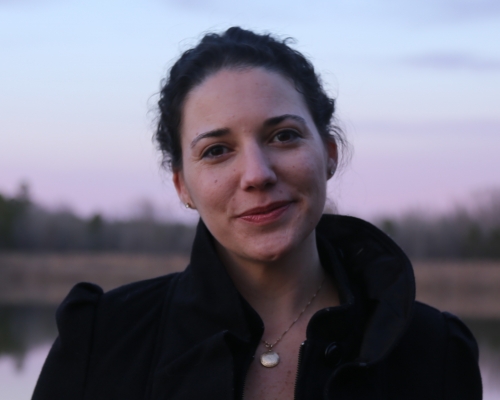 On one hand, the array of colorful balloons tied to a mail box evoked an image of a party. But the hand-written sign that said “Free Dogs” countered the original festive picture with one of longing.

Those contrasting thoughts were with Miller one day when she sat down to write. She didn’t intend to revisit the scene, but the arrival of Louis McDonald Jr. forced her to dig deeper. It didn’t take long for Miller to become engrossed in a story that McDonald wanted her to create.

McDonald and Layla, a dog Miller modeled after her own dog, Winter, ultimately became the central characters in “Biloxi,” her second novel.

“I didn’t stop to think about who the narrator was,” Miller said. “Louis McDonald Jr. was on the page from the first scene and I don’t feel like I created him, at least not consciously. His felt like a story that very much wanted to be told.”

Described as “a strangely heartwarming tale of loneliness, masculinity, and the limitations of each,” Biloxi recently helped Miller get nominated in the Fiction category for the Mississippi Institute of Arts & Letters. The 41st Anniversary Awards Gala will be June 6 at the Mississippi Museum of Art in Jackson.

“I was thrilled,” said Miller, a faculty member in the Mississippi University for Women’s MFA in Creative Writing program. She is one of eight nominees in the Fiction category. “It’s my first nomination. I have known and admired many people who’ve been nominated in the past, and I’m happy to be among them.”

Valentin Bogdan, a professor in The W’s Department of Music, was nominated in Music Composition (Classical) for “Vantage Points” for bassoon and violin. CT Salazar, a graduate of The W’s MFA in Creative Writing program, was nominated in Poetry for his collection “This Might Have Meant Fire.”

“The W is very fortunate to have three nominees in three separate categories for awards from the Mississippi Institute for Arts and Letters,” said Dr. Bridget Smith Pieschel, who is director of The W’s Center of Women’s Research and Public Policy and a professor of English at the school and a member of the 2019-20 MIAL Board of Governors. “I have been a board member of this organization for about a decade, and our university is always well represented.”

Miller also has written the novel “The Last Days of California” (2014) and two collections of short stories: “Always Happy Hour: Stories” (2017) and “Big World” (2009). Her stories have appeared in “The Paris Review,” the “Oxford American,” “New Stories from the South,” “Norton’s Seagull Book of Stories,” “Mississippi Review,” and many others. She is a former James A. Michener Fellow in Fiction at the University of Texas and John and Renée Grisham Writer-in-Residence at the University of Mississippi.

In addition to highlighting “Biloxi” as a tale of loneliness and masculinity, the “New York Review of Books” said Miller has a “sociologist’s eye for the mundane and revealing.” Miller said she didn’t base McDonald Jr. on one person and that he was an “amalgamation of several older men” she knows. She said she enjoyed her first foray into writing from a male character’s point of view and feels all writers are inspired by people they know in creating characters in their stories.

“Every time I sat down to write Louis was there and it felt like he was dragging me along for the ride,” Miller said. “During that time I was supposed to be writing another book and I kept trying to ignore Louis’ story but he wouldn’t let me. He had a story that wanted to be told.”