Brownlow’s story will be included in Best MicroFiction 2021 anthology 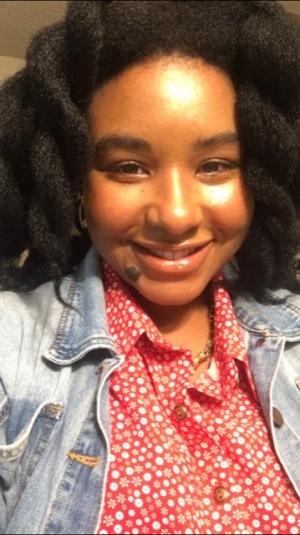 Sometimes it only takes a sentence to awaken Brownlow’s creativity. Those few words then partner with an image in Brownlow’s head to form the genesis of a new story or idea.

Last summer, an early morning car ride with her father and a story that was told on that trip led Brownlow to write the story “It’s 5am-ish and my father tells me a story from his time in Singapore,” which was originally published in the online literary magazine “No Contact.”

Brownlow’s story “It’s 5am-ish and my father tells me a story from his time in Singapore” recently was selected to be included in the anthology, Best MicroFiction 2021, which will be available for purchase soon. MicroFiction is any story told in 300 words or less. Stories in the genre can be as short as a few words.

Brownlow, who graduated from Mississippi University for Women’s MFA in Creative Writing program in August 2018, said she immediately knew she would write about her father’s story, so she texted herself pieces of it as he told it.

“I was caught between the dizziness of my exhaustion, the beauty of seeing day break in and the humor of my dad’s Navy story,” said Brownlow, whose father was driving her to his office so she could pick up her truck. “This piece is about the way parents tell us stories, how they tell stories to others in their lives -- leaving them all with nice endings, happy endings, to put us in a good place.”

Brownlow said her father was on his way up north for a business-related trip and that she had plans later that day, so she had to get up before 5 a.m. and accompany him. The trip had a familiar feeling because Brownlow’s father told her a story, just like he had done since Exodus was a child. The stories could focus on her father’s childhood or his early 20s as he began life with Exodus’ mother, or, as was the case this day, a story from his time in the Navy.

Brownlow, who is from Blackhawk, earned her undergraduate degree from Mississippi Valley State University. She said her mentor, Dr. John Zheng, a professor and the chair of the English Department at MVSU, encouraged her to apply to The W’s MFA in Creative Writing program. Brownlow said that decision is one of the best she has made in her life because her teachers -- Dr. Kendall Dunkelberg, Kris Lee, Mary Miller and others -- challenged her to question what she wanted to write, to read more of the kinds of things she wanted to write, to dedicate herself more to the process and to be patient to let her stories come into their own in the right way.

“The program helped me find my voice,” Brownlow said. “Before, there had been a voice, but it wasn’t strong enough, not quite there. I have that voice now. It feels good to have it, too.”

Dunkelberg, the director of creative writing at The W, said Brownlow was one of the first students to enroll in the school’s MFA in Creative Writing program when it started in August 2015. He said Brownlow “really came into her own” as a writer in the MFA program by writing short fiction, creative nonfiction, culminating with her thesis, a novel manuscript titled “Afroze.”

Miller, a visiting assistant professor of English/Creative Writing, is one of the founding faculty members of The W’s Low Residency MFA in Creative Writing. She said it has been a pleasure to watch Brownlow’s skills develop over the years.

“I’m incredibly impressed with how she’s hustling and getting her work out into the world,” Miller said. “She is bold and confident, and this has always been evident in her writing.”

Brownlow admits she was “very surprised” when “It’s 5am-ish and my father tells me a story from his time in Singapore” was selected to be included in the anthology. She said 2020 marked the first time she had been nominated for anything as a writer, and that the nominations already were “wins.”

Brownlow believes in “writing about your obsessions” to stay inspired. She said she will continue to write in a style that she describes as “literary, southern fiction with horror and fantasy elements” and to challenge herself to question everything.

“Writing is still challenging at times, but it makes a difference when you write in a way that honors your voice/soul,” Brownlow said. “I’ve become a bit of a perfectionist when it comes to polishing my craft because my standards get higher the better I do. But what keeps me sane is remembering it is not anyone else’s standards I’m wishing to perfect, only my own. I often question how happy I am with my work. Is it the best I can do? Do I need to give it some room to breathe? Am I settling? Is something missing? Once I’ve answered all of these questions and get my piece to where it needs to be through these answers, that’s when I know it’s ready.

“As a writer, I think it’s so important never to fold against myself, against my work. I’m very tedious in this way, and as a result I don’t produce a lot of new pieces.”

Brownlow said her essay “One of The Girls Who Lived, One of Those Girls Who Lived, 2004” will be published this June in a special black voices issue of “TriQuarterly Magazine.” She also said her flash, creative nonfiction piece “Things My Aunt Nanny Taught Me” will appear in her first national publication, a special issue of the book anthology “Chicken Soup for The Soul,” which will feature only stories from Black women.

FOR IMMEDIATE RELEASE
March 16, 2021
Contact: Adam Minichino
This email address is being protected from spambots. You need JavaScript enabled to view it.
(662) 329-1976