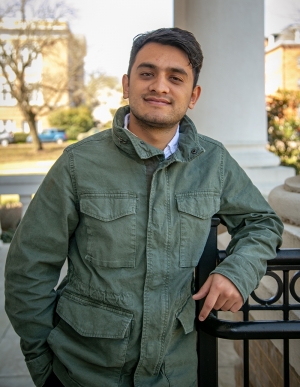 COLUMBUS, Miss. –Another Mississippi University for Women music student received first place at a recent competition. Biraj Adhikari, junior music major with a concentration in composition, won the division for the state of Mississippi at the Music Teachers National Association Student Competition.

“I started music two and a half years ago when I came to the United States. When I was back home, I was pursuing a career to become a doctor, so I didn’t have really any background of music,” said Adhikari.

For the competition, Adhikari composed a piece titled “The Rising” and submitted it to the competition. The piece is a violin duet that is four minutes long.

“Biraj is a music composition student who has been extremely active in composing new works for a variety of musical mediums, thus we thought he would be a natural fit,” said Dr. Valentin Bogdan, associate professor of music.

While Adhikari focuses primarily on composing, he plays instruments such as piano and guitar. He is also a Chamber Singer.

Adhikari is grateful to Bogdan for moral support and for making sure that his compositions get played. He also thanked Dr. Joe L. Alexander, associate professor of music, and Dr. Julia Mortyakova, chair of the Department of Music.

“Biraj is a very hard worker who has come a long, long way since he entered our music department. Because he was from another country, Nepal, he had very limited exposure to Western music and was truly a beginner.  We are very, extremely proud of him,” said Alexander.

Bogdan added, “His success also shows how the faculty of The W’s Department of Music encourage and support our students to look for opportunities outside the university (on state and even national levels).  This gives students an opportunity to start building their musical career from the first day they step foot on campus.”

The MTNA competition is an annual event that begins with state competitions. It is open to all college student composers within the United States.

For Immediate Release
April 5, 2018
Taylor Corder
662-329-7119
This email address is being protected from spambots. You need JavaScript enabled to view it.