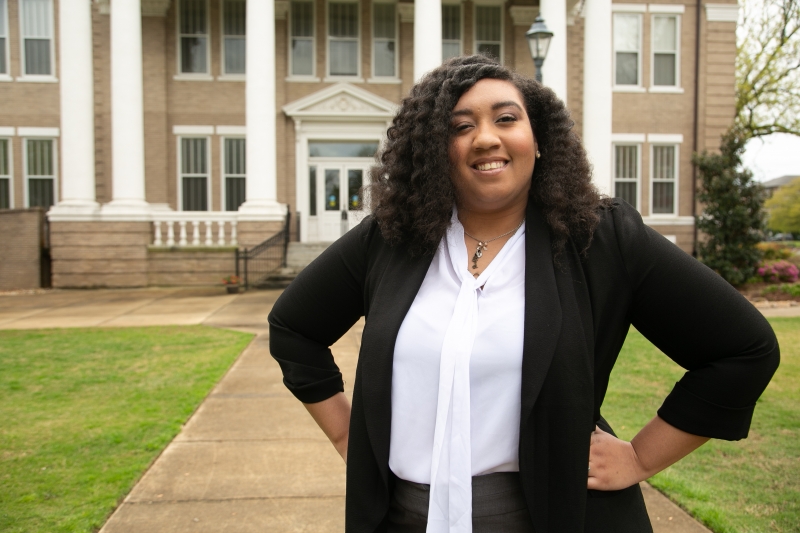 Columbus, Miss.—Krystal Hill-Keys, a music therapy student at Mississippi University for Women, was awarded second place in the older adult student division at the statewide competition held by the Mississippi chapter of the National Association of Teachers of Singing (NATS).

“It’s a great honor being recognized by the state of Mississippi and being able to do something significant for the university,” said Keys.

The competition, held at the University of Mississippi March 29-30, was held in conjunction with the annual conference of the Mississippi NATS chapter, which also featured a masterclass with a guest artist.

In addition to placing second in her division at the competition, Keys was also one of only three singers from around the state to be selected to perform at the masterclass on Friday evening.

In her first competition ever, Keys, sang in the preliminary audition round on Friday afternoon, offering four classical vocal selections that included songs and arias in English, Italian and German. Finalists were announced late Friday evening.

Finals, which were open to the public, were held Saturday morning in Nutt Auditorium on the University of Mississippi campus. For the finals, Keys performed a romantic German art song, “Mein schӧner Stern,” by Robert Schumann.

“In the beginning, I was very nervous. I had never competed before so it was a new experience. The training that I had received from Dr. Hurley helped everything settle and connect. She has been preparing me since the first day,” explained Keys.

More than 100 voice students from around Mississippi participated in the event.

NATS is the largest professional association of teachers of singing in the world. Founded in 1944, NATS members include the faculty of higher education institutions, elementary and secondary schools and teachers at independent studios. NATS offers workshops, intern programs, conferences and masterclasses that provide ongoing learning to members worldwide.