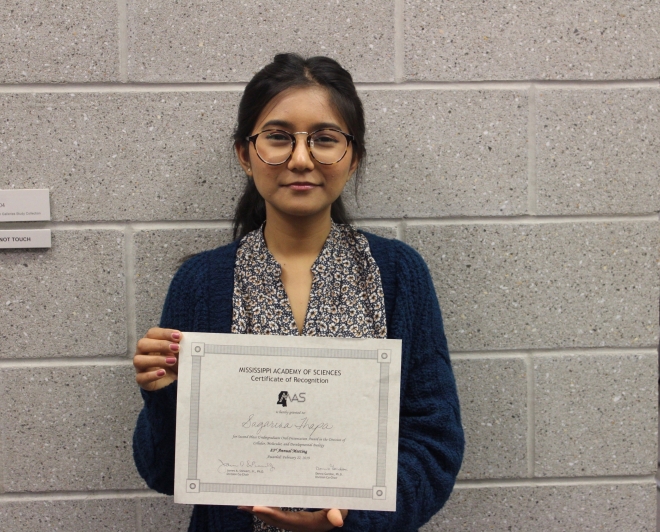 Five or six practice takes in front of a mirror a day earlier did little to remove the anxiety she felt prior to her first presentation at the annual Mississippi Academy of Sciences meeting.

“It was very scary,” said Thapa, a senior biology major at the Mississippi University for Women. “I was pretty jittery the first few minutes and then I got the hang of it. It was OK.”

Diptika Raut was a little more composed. After all, Raut had gained experience as a presenter in August 2017 at a conference in Jackson, so she was used to presenting information, albeit in front of smaller groups or individuals.

Thapa finished second for her oral presentation in the undergraduate category, while Raut received honorable mention for her poster presentation on the optimization of a common biochemical technique called “western blotting” at the 83rd annual MAS meeting in February in Hattiesburg.

Thapa’s oral presentation was about the stability of the Cystic Fibrosis Transmembrane Conductance Regulator, or CFTR, on epithelial cell membrane. She said it was designated for 15 minutes and ended up being 11. The remaining time was used for questions and answers.

Shraddha Neupane and Anush Aryal, who are junior biology majors at The W, also attended the MAS meeting as observers. They are also from Nepal.

Dr. Ghanshyam Heda, professor of biology at The W, has been attending the MAS meeting regularly since 2009. He trained the students in his research laboratory. Heda didn’t present a paper at the meeting, but he was co-author in both students’ presentations. He said Neupane and Aryal will take the place of Thapa and Raut as researchers in his lab.

“Research is helping immensely in boosting their confidence and getting admissions into Ph.D. program at top universities,” Heda said. “For example, Sagarina has received more than one interview call for Ph.D. studies that she plans on pursuing soon after her graduation from The W.”

Dr. Travis Hagey, an assistant professor of science at The W, also attended the meeting. He presented a talk titled “A Classroom Activity Simulating Population-Level-Evolution by Hand.” It was about a classroom activity he wrote that has students study how evolution works by following a population off birds through time across generations. The students get to control how the color of the birds changes from parent to offspring generation to generation. The presentation was 12 minutes, followed by a short question-and-answer period. It was the first conference he attended in the state of Mississippi. He gave a talk last semester (fall 2018).

Thapa, who is originally from Nepal, worked as a volunteer in Heda’s lab in the summer of 2018 and part time in the fall of 2018. She will graduate from The W in May. She hopes the experience she gained at the meeting will help her in the search for opportunities in graduate school. She said she already has applied to several schools and that she hopes to continue research into cancer biology. Thapa also minored in mathematics and chemistry at The W.

Thapa said she tried to memorize her presentation in front of about 30 people. She said she left two or three facts out of her talk, but she felt she told all of the key points about her presentation. The material she presented dealt with research she and Raut did with Dr. Heda.

The CFTR gene provides instructions for making a protein called the cystic fibrosis transmembrane conductance regulator. This protein functions as a channel across the membrane of cells that produces mucus, sweat, saliva, tears and digestive enzymes. The channel transports negatively charged particles called chloride ions into and out of cells. The transport of chloride ions helps control the movement of water in tissues, which is necessary for the production of thin, freely flowing mucus. Mucus is a slippery substance that lubricates and protects the lining of the airways, digestive system, reproductive system and other organs and tissues.

The CFTR protein also regulates the function of other channels, such as those that transport positively charged particles called sodium ions across cell membranes. These channels are necessary for the normal function of organs such as the lungs and pancreas.

Thapa said the goal of the research was to learn more about how to stabilize mutated CFTR proteins on a cell membrane. She said mutations on a gene will lead to a pulmonary disease called cystic fibrosis. The ability to stabilize the mutated CFTR proteins on the cell membrane could help prevent the disease. She said she and Raut have been a part of the research for two semesters and a summer.

Raut, who also is a senior biology major, turned the PowerPoint presentation into a poster that illustrates the optimization of proteins of different molecular masses. She worked with Thapa in the fall of 2018. She said the title of the presentation sounds “heavy” but it is not that involved. In fact, she said the research was designed to optimize a technique through which they can get optimal protein signals.

She said the poster included information from an additional experiment that was done following the initial presentation of the poster last summer.

Raut, who also is from Nepal, said she didn’t know Thapa prior to coming to The W. She said she plans to work for a year in a research capacity at a school to be determined. She said she then will consider attending graduate school or going to pharmacy school in the United States.

“(The W) is a small university, but there are opportunities if you really strive and look for them and you really want to work,” Raut said. “We would like to thank The W for giving us such opportunities.”

The MAS meeting is designed to present addresses, symposia, workshops, scientific papers and exhibits of interest to its members. Research papers are presented in divisional meetings which include agriculture and plant science; cellular, molecular and developmental biology; chemistry and chemical engineering; geology and geography; health sciences; marine and atmospheric sciences; mathematics; computer science and statistics; microbiology and immunology; physics and engineering; psychology and behavioral neuroscience; science education; and zoology and entomology.

FOR IMMEDIATE RELEASE
March 14, 2019
Contact: Adam Minichino
(662) 329-1976
This email address is being protected from spambots. You need JavaScript enabled to view it.