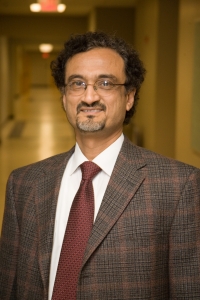 The prospect of taking three years to realize a goal doesn’t faze Heda because the professor of biology at Mississippi University for Women has tackled numerous projects in his long career and has achieved significant results. Before joining The W in 2008, Heda had worked in the pharmaceutical drug industry and with the government conducting biological research.

Heda realized the next step in his latest journey Tuesday, April 14, when “Future Science” published his article titled “Optimization of western blotting for the detection of proteins of different molecular weight” on its web site. The article, which is co-authored by W graduates Lisa Shrestha, Sagarina Thapa, Shreya Ghimire and Diptika Raut, will appear in the June issue of the journal BioTechniques.

The online version of the article can be found at:

“I expect this work to become very popular among protein biochemists throughout the world because of improvement in sensitivity and usefulness of this technique,” Heda said.

The article describes the improvement of a biochemical technique called “western blotting” to detect specific protein in a mixture of proteins. Heda said the improvement will allow researchers to detect protein of their interest that is present at low levels that otherwise is difficult to detect with the routinely used standard procedure.

This is the third time Heda has published in BioTechniques. Previously when he worked at the Temple University School of Medicine, he published two articles. He said his latest work already has attracted a lot of attention on Research Gate (www.researchgate.net), which is an equivalent to Facebook for researchers. In all, Heda said he has published about 40 articles in high-profile journals.

Heda said the manuscript was accepted after almost five months of peer review and revision. He said it took students nearly three years to generate the date. Heda said students usually work full time in the summer and part time during regular semesters.

Joseph Martin, managing editor of “BioTechniques,” said the journal’s goal is to unite the diverse members in the field of Life Science, with the ultimate goal of improving research and results by enabling collaboration and communication of techniques. He said Heda understands the importance of new and improved laboratory techniques.

“It is a pleasure to publish this manuscript, which will provide a useful resource for many researchers around the world attempting to improve the signals of proteins that are expressed at low levels,” Martin said. “Additionally, the observations reported in the publication can also eliminate the risk of being exposed to a toxic solvent.”

FOR IMMEDIATE RELEASE
April 16, 2020
Contact: Adam Minichino
This email address is being protected from spambots. You need JavaScript enabled to view it.
(662) 329-1976