Sample to share his love of microbiology this summer 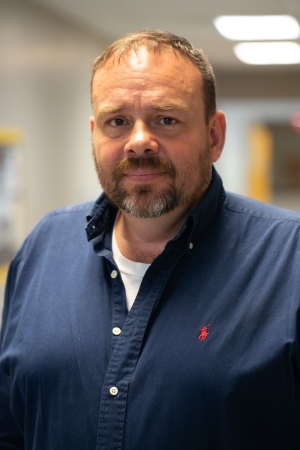 Sample didn’t know it at the time, but the old, orange-covered copy of “Microbe Hunters” from Dr. Richard Sames’ bookshelf changed his life.

Subtitled “The Classic Book on the Major Discoveries of the Microscopic World,” Paul de Kruif’s tome, which was first published in 1926, kept Sample busy during the summer between his junior and senior years at the University of Illinois at Springfield. When Sample returned to school, he was convinced he wanted to be a microbiologist.

“It came to me just like second nature,” Sample said.

He wants his students at Mississippi University for Women to develop the same understanding for microbiology. The military veteran and longtime educator hopes to use two courses in The W’s summer sessions to spark those epiphanies in students.

“Given the current state of the world in regards to the current SARS-CoV-2 pandemic, I felt bringing these courses to The W would benefit our science majors and those who are not science majors but just curious to know more about ID and Epidemiology,” Sample said.

The W’s first summer session begins May 20. SM 101 (Environmental Science I) and BSB 101 (General Biology I) also will be offered in the session, which runs through June 26. SM 102 (Environmental Science II) and BSB 102 (General Biology II) and will be offered in Summer Session II, which will run from June 30 to July 30. All the courses can be found in The W’s Schedule of Classes  https://ssb.muw.edu/pls/prod/wwskschd.P_SelTerm

Sample has taught the ID course previously and has had the epidemiology material as a small component of all the virology, parasitology, ID, mycology, bacteriology, immunology and genetics courses he has previously taught. He said this will be the first time he or anyone from the department is teaching the courses at The W.

The ID class will focus primarily on the pathogens, symptoms, treatments, transmission and some history of where they came from. There will be a special emphasis placed on re-emerging and emerging human pathogens and zoonotics, i.e., pathogens that can be spread from animals to humans.  The epidemiology class will focus on disease monitoring in the population, but it will have a special emphasis on disease causing pathogens with a running emphasis on SARS-CoV-2 and the associated disease condition COVID-19.

Sample said the courses have been designed so they can be delivered completely online or through the traditional lecture method to be adaptable to the current state of the world. He said they will be solely offered online this summer.

Sample said the organisms’ ability to survive intrigues him. Students will examine these highly adaptable pathogens and earn a better appreciation for their resourcefulness. Sample said that knowledge will show students how they can avoid becoming potential hosts by understanding the spread, transmission, and life-cycles of these pathogens. The information about current pathogen outbreaks and other forms of disease will allow students to discern the most important facts to prevent them and their families from falling ill.

Sample said he found that connection with microbiology after he served in the United States Air Force and was a student at UIS. He worked with a set of bacteriophages, i.e., bacteria viruses, under the direction of Dr. Sames.

He went on to serve in the U.S. Army and the U.S. Marine Corps and earned his master’s degree in biology (focus in microbiology/virology) from Southern Illinois University at Edwardsville.  He went on to receive his doctorate in microbiology (focus on virology and molecular biology) at the University of Mississippi Medical Center in Jackson. At each institution, Sample worked with accomplished teachers and researchers and expanded his understanding of the importance of infectious diseases and epidemiology.

“The research on the SARS-CoV-2 virus has shown how readily humans can be susceptible to a pathogen that is primarily found in non-human hosts,” Sample said. “It has demonstrated the interconnectedness of every organism that lives on this planet, and as humans, we should have an understanding of the pathogens that can have devastating effect on us both physically and as a society. By understanding how these pathogens survive, are transmitted, treated, and how there spread is controlled, we can be better citizens of the global community.”