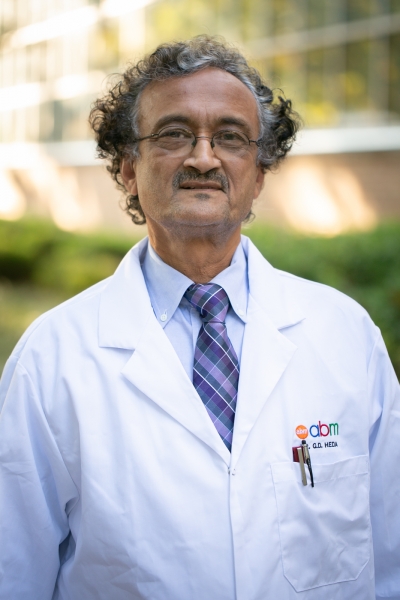 COLUMBUS, Miss. --Mississippi University for Women’s Dr. Ghanshyam Heda recently spent two months of his sabbatical leave conducting research on cystic fibrosis in the physiology laboratory of professor David Sheppard at the University of Bristol in the United Kingdom.

Heda conducted the research after being officially appointed as a visiting professor in the School of Physiology, Pharmacology & Neuro science at the University of Bristol, which is ranked as one of the top 10 schools in the U.K. and one of the world’s top 100 universities.

“It was an honor to work with professor Sheppard and at such a prestigious university,” said Heda, whose appointment ran from March 1 through April 30.

Heda will continue the research he started at the University of Bristol at The W thanks in part to a $15,000 seed grant he recently received from the Mississippi Space Grant Consortium for conducting undergraduate research in any STEM-related field (science, technology, engineering and mathematics) that has relevance to National Aeronautics and Space Administration (NASA). The grant is one of three awards given to researchers at colleges and universities in the state of Mississippi. The awards are designed to strengthen research competitiveness and collaboration and to create research opportunities for undergraduate and graduate students.

Heda’s laboratory is the only one in the state of Mississippi working on cystic fibrosis, a genetic disease caused by mutations that affect the function of a protein called CFTR (Cystic Fibrosis Transmembrane-conductance Regulator).

“I have worked in the area of CFTR-transepithelial biology for more than 25 years,” Heda said. “I spent a semester in India in 2018 as a Fulbright U.S. Scholar, which is when I first collaborated with Dr. Pinaki Talukdar, an organic chemist who works at the Indian Institute of Science Education Research.”

Heda wanted to spend some of his sabbatical in Europe doing some physiological experiments at a research laboratory. He credited Dr. Paula Sommer, the head of research of the Cystic Fibrosis Trust, UK, for reminding him about his collaboration with Sheppard on a cystic fibrosis publication more than 20 years. Heda also interacted with Sheppard at conferences in 2002 and 2003 in Portugal.

Heda said the work in Sheppard’s lab involved functional studies using a technique called “Ussing Chamber Chloride Assay” on chemical compounds Heda received from his collaboration with Talukdar. Heda said the compounds have potential to become therapeutics in the treatment of CF.

“My lab here at The W is working on biochemical and molecular aspects, and professor Sheppard’s laboratory will contribute to its physiological aspects,” said Heda, who anticipates some information from the studies of the compounds may be available later this year.

Heda will train W student Maggie Taylor to work on the project in his laboratory in July. Heda said he is proud of the fact that many of The W students who have trained in his research laboratory have moved on to graduate and medical schools.

Dr. Mayuree Rodrat and Dr. Hongyu Li have worked on the project and are also actively involved with professor Sheppard at the University of Bristol.

FOR IMMEDIATE RELEASE
June 6, 2022
Contact: Adam Minichino
This email address is being protected from spambots. You need JavaScript enabled to view it.
(662) 329-1976