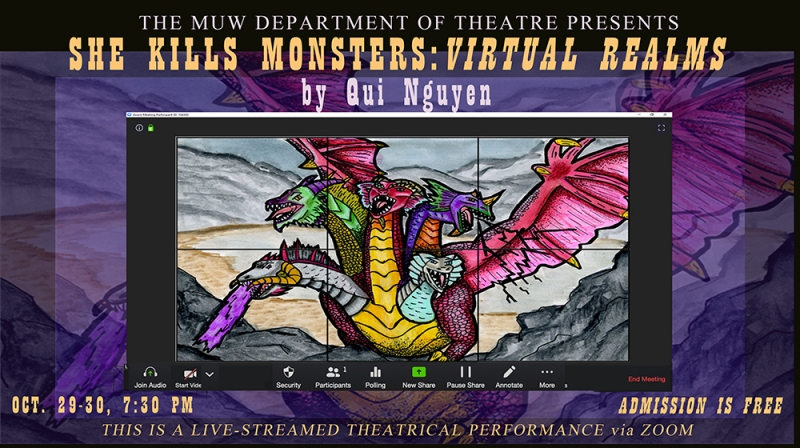 The junior from Meridian has been an actor, dancer and backup singer and stage manager in his first three shows as a theatre major at Mississippi University for Women.
Nunnery won’t be the only student playing a new role in The W Theatre Department’s next performance.

In fact, Nunnery and the entire cast of “She Kills Monsters: Virtual Realms” will branch out into uncharted territory when they take part in the Zoom production at 7:30 p.m. Oct. 29-30.

“I think this project really opens up the eyes of how theater can be portrayed,” said Nunnery, who will play the role of Chuck Biggs in “She Kills Monsters: Virtual Realms.” “Theater is constantly evolving and innovating, and this has become a new way to present our art to a large number of people. With COVID-19, necessity has helped us to discover this alternative method. It’s not really a way most of us thought we would experience theater, but it’s good to know this is always an option.”

Kathy Newman, assistant professor of theatre at The W, said “She Kills Monsters: Virtual Realms” was written specifically for Zoom, which is one of the main reasons the department chose to put it on our production calendar this semester. Zoom, which uses a cloud-based, peer-to-peer software platform to provide video and audio conferencing, chat and webinars, has been widely used to connect people during the COVID-19 pandemic. Newman said Zoom provided the best option because student performers still aren’t allowed to be in a theater with audience members.

“It is so important to keep the arts alive for education and entertainment,” Newman said. “Most every theater that produces “She Kills Monsters: Virtual Realms” is pre-recording their performances; we are excited to announce we are live streaming our production on both nights.”

Admission to the performance is free. Tickets are available by calling The W’s Theatre Department at 662-329-7353, by emailing associate professor David Carter at This email address is being protected from spambots. You need JavaScript enabled to view it. or by visiting The W Theatre Department’s page on Facebook.

The performance will offer a new challenge for Nunnery, who played Father Jack in “Dancing at Lughnasa,” was a dancer and a backup singer in “Schoolhouse Rock Live!” and was the stage manager in “No Exit.” He said everyone is excited to put on the play after nearly a year since the last performance.

Jordan Rauhoff, a junior theater major, serves as the props artisan, armor crafter and set designer for “She Kills Monsters: Virtual Realms.” This is the fifth full production he has worked on at The W in addition to the community theater work she has done with the Tennessee Williams Tribute. She said the technical and logistical challenges – like shipping props and armor to cast members in Texas and California – have added to the challenge.

“It has been a hurdle to learn to adapt our trades and make them work virtually,” Rauhoff said. “However, I believe we’re progressing well and will have a fantastic show.”

Nunnery said one of the biggest challenges doing a Zoom show is the actors are unable to fully pick up on the energy of their fellow actors. He said audience feedback and interaction with cast mates are key parts of the appeal of live performances. He acknowledged those elements will be much harder to convey through a Zoom call, but he knows it is possible.

Nunnery also hopes there won’t be any internet issues that affect the video connection to the performance.

“We will have to really be aware of our vocality as well as the quality of not just the sound but the image as well,” Nunnery said. “We are more dependent on each other than ever with this performance because we will be unable to see how we look or sound in relation to everyone else as the computer always makes your camera look the best. I think a big part of preparation is going to be making sure you have the best camera quality possible and looking out for each other and trying to find clever solutions to any tech issue that should arise.”

Newman said this is the first time The W Theatre Department has ventured into a production like this. She said the actors will be challenged because they won’t be in the room with one another. As a result, Newman said timing has been an essential ingredient in rehearsals so the students can be prepared for the unknowns that are bound to happen.

Newman credits the students and faculty members involved for taking on added tasks, learning the ins and outs of Zoom, sound cue systems design, background design and costume/prop design. She also is excited about the production because Zoom’s outreach means three actors from California will be involved in the project.

“The team made the production work,” Newman said. “We took on this project because it is a new experience for students and faculty. We knew it would push us forward in the educational and professional process. The benefits were enormous in teaching the skills of online production work. With Zoom and other online sources being used in the theater industry, it is important that students are given the opportunity to hone their skills.”

“She Kills Monsters: Virtual Realms,” writer by Qui Nguyen, tells the story of two sisters, Agnes and Tilly. After Tilly is killed in a car accident, Agnes goes on a journey into the Dungeons and Dragons world that was her sister’s refuge when she was alive. The play is Agnes’ imaginary adventure and discovery of her sister’s world. Two characters on this journey are Agnes, who will be played by Kelsey Wilk, and Chuck, who will be played by Nunnery. Libby Hawkins and Newman will be the co-directors. David Carter will provide technical direction.

FOR IMMEDIATE RELEASE
Oct. 19, 2020
Contact: Adam Minichino
This email address is being protected from spambots. You need JavaScript enabled to view it.
(662) 329-1976