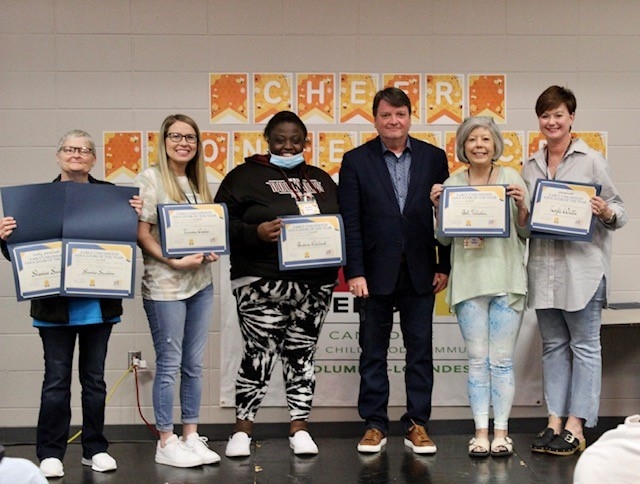 Sherriee Sanders, Lezli Waits and Tamron Crocker used those words to sum up their experience at the inaugural Celebrating and Highlighting Early Education Respect (CHEER) Conference on April 2 at the Mississippi University for Women.

In all, 136 attendees participated in the event designed to recognize and praise local early childhood educators and provide them with high quality professional development and supportive resources.

“I had heard great things because of the publicity before the event, but it was much better than I could have ever thought,” said Sanders, who works as a teacher at The W’s Child and Parent Development Center (CPDC). “It was wonderful to be able to see other teachers and colleagues again. Education has been rough on everyone, and this was just a good reminder that we are important.”

Sanders has worked in education for more than 30 years. She has been at the CPDC for three years and works as the lead teacher for 1- and 2-year-olds. She also serves as a mentor teacher for early childhood bachelor’s degree candidates with The W’s School of Education and as a mentor for the CPDC work study students.

Sanders said it was wonderful to be poured into, pampered and refreshed for one day. She said the conference brought the community together to realize the importance of early childhood, and that it was great seeing all the community leaders there to celebrate what early education teachers do.

Sanders also said she was “shocked” to receive the Early Childhood Educator of the Year.

“To my knowledge this is the first time anyone in our area has been recognized for the work in early childhood,” Sanders said. “I was humbled and honored. There are so many good teachers in early education that deserve the recognition. It really gave me the lift I needed.”

Waits has spent all 16 of her years in early childhood education in the FPCDP. She said she thought the conference was going to be like others she had attended, but she credited Melinda Lowe, director of The W’s Office of Outreach and Innovation, and Penny Mansell, director of The W’s CPDC, for organizing such an outstanding event.

“Melinda, Penny and the rest of the planning team outdid themselves,” said Waits, who enjoyed the singing and dancing participants did with Don Monopoli from The Learning Station. I know for me it recharged my passion for early childhood education.

“Teaching young children is my calling, and I want to continue to learn new and exciting ways to reach my students. I think events such as the CHEER Conference can help give early childhood educators the tools they need to be successful which in turn will provide children with the building blocks they need for educational achievement.”

Crocker has worked in childcare for nearly three years. She is in her second stint at ABC & Me Christian School, where she works as a designee and helps director Tracy Power with administrative work. Crocker said she expected to receive formal training in classes at the conference, but she quickly discovered she was going to be part of a much livelier day.

“I think it can impact the community to teach and equip those in early childcare that learning can be fun and that we as teachers have a very important role in these children’s lives,” Crocker said. “I enjoyed everything about the event. The energy, the dancing, the singing, the information, the tools we were given and the food.”

The finalists for Educator of the Year received $100 for their personal use. The overall winners won an additional $300. The Columbus-Lowndes Excel by 5 Coalition sponsored the financial rewards.

FOR IMMEDIATE RELEASE
April 18, 2022
Contact: Adam Minichino
This email address is being protected from spambots. You need JavaScript enabled to view it.
(662) 329-1976