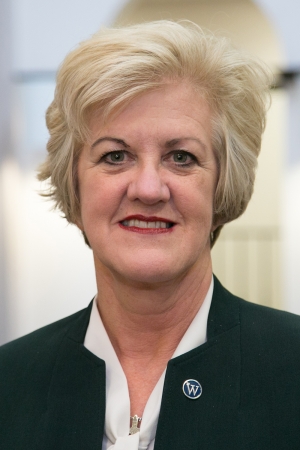 In her former role as senior vice president for administration and chief financial officer at the university, Miller was responsible for the financial and business management of the university, the operation of the physical plant and related support services and the development and implementation of the campus facilities master plan. She also participated in the formulation of policies, programs and budget development and interacts with students, faculty, staff, the Board of Trustees and agencies to the campus. In addition, she served as the legislative liaison for the campus, advocating for the university with state leaders and legislators.

Miller also served as vice president for finance and administration for the university for 11 years. She has also served as director of budget and financial analysis and director of internal audit for the Mississippi Institutions of Higher Learning; director of accounting for Central Alabama Community College; senior auditing accountant for Potter, Bryant & Tate in Birmingham, Ala., and as supervising senior auditing accountant for the Colleges and Universities Division of the Mississippi State Auditor’s Office.

Miller served as chair of the University Press of Mississippi and has served on the Board of Directors of the Southern Association of College and University Business Officers (SACUBO).  She serves as Secretary/Treasurer of the Southern Universities Conference.  She is active in a number of organizations including the Mississippi Chapter of the International Women’s Forum, Town and Tower, serving as chair in 2014-2015; Columbus Air Force Base Community Council; and Rotary Club of Columbus, serving as president in 2008-2009, and a three-time Paul Harris Fellow. A member of St. Paul’s Episcopal Church, she has served on the Vestry and as Senior Warden in 2015-2016. Miller was also on the Board of Directors of St. Paul’s Episcopal School, serving as chair in 2009-2010.

A Leadership Mississippi graduate, Miller was named one of the Top 50 Businesswomen of the Year by the Mississippi Business Journal. Other honors include being named a 2019 Woman of Distinction by the Girl Scouts Heart of the South council, and a Rotary District 6820 2019 Champion of Change.  Most recently, Miller received the Mississippi Distinguished Civilian Medal of Honor for her responsiveness to the soldiers and airmen of the Mississippi National Guard.  A member of the Mississippi University for Women Alumni Association, she has served as treasurer for the MUW Alumnae Association and the MUW Ecumenical Council.