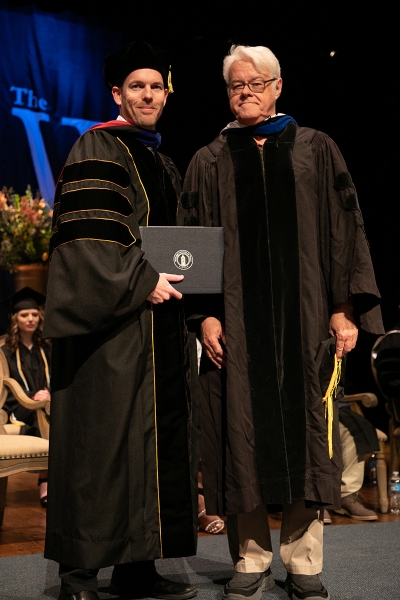 “You improvise. You overcome. You adapt.”

Clint Eastwood’s Gunnery Sergeant Thomas Highway rasps those words to a platoon of Marines in the 1986 movie “Heartbreak Ridge.” Dr. Van Roberts knows the words well, even if he doesn’t say them with Eastwood’s trademark snarl.

Regardless of the speaker, the words apply equally well to Roberts’ time at Mississippi University for Women as they do to the soldiers in Eastwood’s movie about the United States’ invasion of Grenada in 1983.

In the case of Roberts, his ability to improvise, overcome and adapt allowed the former radio and television reporter to transition into a life as a professor at The W and survive for 34 years. Roberts’ distinguished stay at The W was recognized when he was named professor emeritus of communication.

“I never thought I would be a professor,” Roberts said. “I never really imagined I would go anywhere else because I actually enjoyed working here. I got to teach the classes I wanted to teach, and it was a blast.”

Roberts will received his honor at The W’s Spring Commencement exercises. Even though he is slated to retire, Roberts said he will return to The W in the spring of 2023 to teach up to six hours.

Roberts arrived at The W in August 1988 after stints at a variety of jobs, including a reporter at WMBC radio in Columbus, a news photographer and reporter at WCBI in Columbus and a mud logger in Texas. Mud loggers are field specialists who monitor the oil well and collect samples for the geologist.

“I tried to come in and keep everybody happy and make them do the work,” Roberts said.

Years later, Roberts has a cornucopia of classes to his credit that reflects his love for movies and cinema. Along the way, he went back to MSU to earn his doctorate in history in 2006. He said one of his upcoming projects will be to try to transform his dissertation “The Warner Brothers War Movies of 1942-45” into a book.

Roberts will have plenty to keep him busy before he returns to The W. He will continue to write movie reviews for The Starkville Daily News and The Daily Times Leader (West Point) as well as The Packet, a weekly newspaper in Columbus and The Planet Weekly, an Alternative arts, music and entertainment publication based in Tuscaloosa, Alabama.

Dr. Martin Hatton, dean of The W’s School of Education, stressed a point he believes often gets overlooked about Roberts.

“Dr. Roberts is the most knowledgeable person I have met or probably will ever meet when it comes to movie history and critique,” Hatton said.

Hatton said someone needs to talk with Roberts for only a few minutes to see the breadth and depth of Roberts’ knowledge. He said a perfect example is Roberts’ dissertation. Roberts spent weeks in film production libraries in Los Angeles and at the National Archives, pouring through documents and corresponding with the leading expert at the time to complete his doctorate.

“I remember Dr. Roberts telling me at the close of his interviews that he was told, ‘You, now, are the leading expert in the subject,’” Hatton said. “In a passing conversation, I’m not sure how many people pick up on the depth of his expertise and really appreciate what an opportunity they have to learn from Dr. Roberts, but those who spend some time with him talking about film walk away with a treasure trove of information and perspective on film that’s absolutely incredibly enlightening.”

Dustin Nolan, a systems/network analyst in Information Technology Services, has had numerous talks with Roberts and visits to his “movie cave” throughout the years. He said the shelves lined with movies are proof that Roberts has seen more movies than anyone he knows and remembers lines that fit just about every situation.

“Van is always able to bring out great nostalgia by helping to reacquaint you with one of your favorite movies from your past,” Nolan said. “Sometimes Van will even treat you by surprising you with your own copy, write a movie review of it and then post it to his vast online collection of movie reviews.

“The university has been fortunate to have Van as The W’s own in-house movie and film expert and teacher for 34 years. Van always takes the time to learn what kind of movies each person enjoys and is genuinely interested in why you enjoy them. Van will remember each person’s movie preferences and will find you to make sure you are aware of a new movie he thinks you may enjoy. Van just wants everyone to enjoy the movie experience as much as he as he does.”

Jill O’Bryant, executive assistant to The W President Nora Miller, had numerous classes with Roberts en route to earning her bachelor’s degree in journalism in 1995. She said Roberts’ classes always were fun and the students learned so much.

“He was such an awesome instructor,” O’Bryant said. “His knowledge of movie history is amazing. Even 30 years later, I remember things he taught us when I’m watching a movie, such as analyzing music and sound effect in movies.”

Roberts hopes his passion for movies rubbed off on his students. Whether it is a spaghetti Western, Korean science fiction or an American war movie, Roberts knows the best lines from each genre. If those styles don’t appeal to you, don’t worry because Roberts will improvise and overcome the odds and adapt to find a movie for you.

“I guess you could say I have grown like a wine bottle that has been stuck on a shelf for years,” Roberts said. “You have to understand where students come from and then you adapt to that. Then you figure out ways to get them to do things because it’s easier if you can get them to do things instead of make them do things.”

FOR IMMEDIATE RELEASE
May 11, 2022
Contact: Adam Minichino
This email address is being protected from spambots. You need JavaScript enabled to view it.
(662) 329-1976