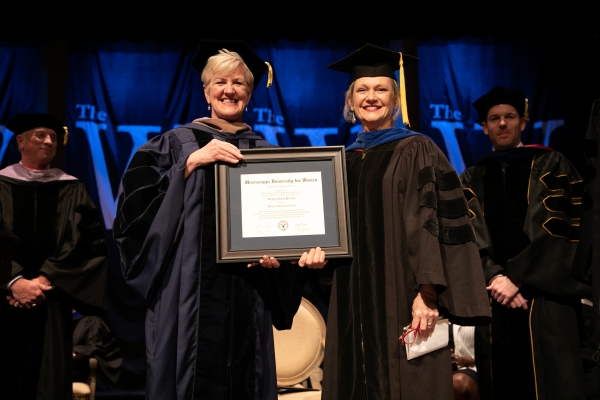 After 39 years of service, Dr. Bridget Smith Pieschel was awarded an Honorary Doctorate of Humane Letters at the university’s Spring Commencement.

“I accept this honorary doctorate with humility and pride. This university has already given me two priceless gifts: my education and my career. I am who I am because of The W. I hope everything else I do in my life will honor not only my alma mater, but those who came before me, and those who will come after me,” said Pieschel.

The Louisville native is an emerita professor of English and women’s studies whose career included serving as the director of the Honors Program, dean of the Division of Humanities, chair of the Department of Languages, Literature, and Philosophy and director of the Center for Women’s Research and Public Policy.

“Dr. Pieschel embodies all that is wonderful about The W.  She has inspired and encouraged thousands of W students and many other people – including me – and will continue to do so,” said President Nora Miller.

Pieschel was awarded the MUW Medal of Excellence in 2005 and the Kossen Distinguished Faculty Award in 2012. She has published articles surrounding individual Southern women, including Eudora Welty and the founder of the O Henry prize, W alumna Blanche Colton Williams. Pieschel gives numerous presentations each year to university, professional, civic and student groups about The W’s history and 19th-century women’s education.

Student interns for the Center for Women’s Research and Public Policy alongside Pieschel published a collection of oral histories: “Golden Days: Reminiscences of MSCW Alumnae, 1926-1957,” including several important interviews collected by the MUW Alumni Association members in 2004 and 2005.

Pieschel is a past president of the Board of Directors of the Mississippi Institute of Arts and Letters and is a past state director of the Southern Literary Trail, focusing on Southern writers in Alabama, Mississippi and Georgia. She is a governor’s appointed commissioner and vice chair for the Volunteer Mississippi Commission, and is a board member of the Lowndes County Community Foundation Board, which is a part of the CREATE Foundation. Pieschel is a member of Lowndes County 100 Women Who Care. She also serves as a Foundation Board member for the Mississippi Free Press.

Pieschel and her husband, Steve, are long time parishioners of St. Paul’s Episcopal Church and live in Columbus, Mississippi. They have five grown children and five grandchildren.

FOR IMMEDIATE RELEASE
May 7, 2022
Contact: Tyler Wheat
(662) 241-7683
This email address is being protected from spambots. You need JavaScript enabled to view it.