Perian Conerly, who dazzled with her warmth, looks and words, dies at 94 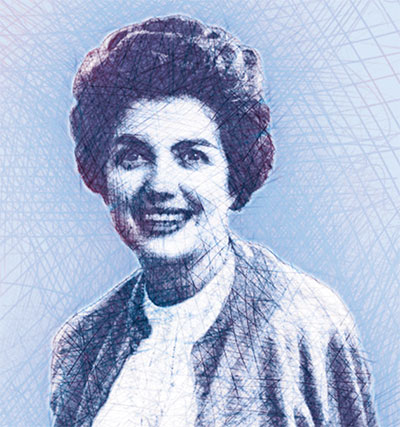 Perian Conerly's Eyes always sparkled when she told stories, as she so often did. She was a beautiful woman, inside and out, and a natural storyteller possessing plenty of material to tell. She also could write, and write well, and we will get to that.

One of my favorites was her story about the 1958 NFL Championship Game, the one that football historians credit with putting professional football on America’s center stage. The New York Giants played the Baltimore Colts. Charlie Conerly, Perian’s husband, was the Giants quarterback. Johnny Unitas quarterbacked the Colts. The two had a shootout that became NFL legend that day.

“Charlie threw a touchdown pass to Frank Gifford that put the Giants ahead by three points late in the game,” Perian told me. “There wasn’t much time left and they took a vote for MVP, and Charlie won.”

Then, in the last two minutes, Unitas passed the Colts down the field to set up a field goal and send the game into overtime. The Colts scored first in overtime to win the game. Another vote was taken for MVP. Unitas won and was presented a shiny new Corvette. Unitas gave the car to his wife.

Said Perian back in 2002, “I always said Dorothy Jean Unitas was driving around Baltimore in my car.”

Perian Conerly died Thursday in her hometown of Clarksdale. She was 94 and had out-lived her beloved Charlie by 25 years. Perian remained very much a part of Mississippi’s sports scene in her later years, usually presenting the C Spire Conerly Trophy to the state’s top college football player at the annual Conerly Trophy Banquet. On occasion, one of Charlie’s old Giants teammates, Gifford, Pat Summerall or Kyle Rote — all dead now — would emcee the event as a favor to Perian and a tribute to their pal, Charlie.

In the 1950s, Charlie and Perian were the toast of New York — he the ruggedly handsome quarterback and the original Marlboro man, she the Southern belle with movie star glamour, a naturally warm personality and all that charm and wit.

From all accounts, she was the first female sports writer, who wrote columns for the New York Times, among other publications.

She was the first female member of the Football Writers of American Association (FWAA). Once, she appeared on the old “What’s My Line” TV show and dazzled both the panel and audience and was joined late in the show by her husband. Back in 2001, long after Perian had ceased writing, I called to tell her that Sally Jenkins of the Washington Post had been judged the best sports columnist in American newspapers.

Perian was pleased. “I don’t know her, but I do know her daddy, Dan Jenkins,” Perian said. “He’s a wonderful writer. It must run in their blood.”

Perian could write. Consider this paragraph from her book “Backseat Quarterback” first published by Doubleday in 1963. Perian was writing about meeting Charlie at a swimming pool in 1947: “I was immediately taken with his dark good looks and engaging shyness. And he had lean, low-slung lines peculiar to athletes and Cadillacs. I have always been partial to both.”

In her columns and her book, she wrote intelligently and with much wit. She took a complicated sport and broke it down in the simplest of terms. She wrote cleverly in terms even a novice fan could easily digest. And she had great sources, people named Gifford, Rote, Summerall and Chunkin’ Charlie Conerly.

She had been the editor of her college newspaper, “The Spectator,” at what is now Mississippi University for Women. After marriage, Perian approached the editor of the Clarksdale paper with the idea of writing a weekly column about life in New York during the football season. The column was instantly a hit, so she approached The Clarion Ledger about also publishing the column. Suddenly, she was syndicated. The North American Newspaper Alliance learned of the column and sought to publish on a much wider scale. The New York Times was among the subscribers.

Perian once told me she thought many of the newspaper editors “were intrigued by the idea of a woman sports writer. I mean, back then it was just unheard of.”

All that happened decades before the controversy of women writers being barred from — or allowed into — the supposed sanctity of men’s locker rooms.

“Heavens no,” she answered once when asked her if she had ever considered entering a post-game locker room.

There was no need to, really. She already had trusted inside sources. And she slept with the star quarterback.