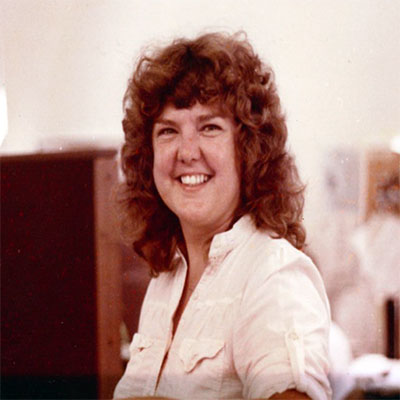 Bebe Roberts Freeman’s husband, Harry, described her as a “bomb throwing community activist who could pass as a Southern belle when the situation demanded it.” Bebe was known for her passion for social justice and the caring attitude she lived every day by her willingness to help all mankind and womankind.

Her willingness to support and encourage others was a real asset to lifelong friend Dr. Helen Turner.

“I first met Bebe when we were freshmen at The W, both working as servers in Shattuck dining hall,” she recalled.” Servers worked to serve meals to all the campus students three times a day, seven days a week. We were grateful for the opportunity to pay for room and board through this work program. It was hard work with long hours, but the whole group of us formed long-lasting friendships. When some of us were discouraged and tired, Bebe was always upbeat, cheerful and happy.”

Long after their college years, the two remained friends.

“Bebe had many, many friends, all of whom loved her dearly.” Turner said. “Everyone was drawn to her because of her warm, caring and endearing personality. She never met a stranger. Bebe was my dear lifelong friend. We visited and had lunch together whenever we could. Even in her last years when she was battling cancer she never complained nor felt sorry for herself. She was always the same, always happy, cheerful and hopeful.”

Helen would like Bebe “to be remembered for spreading joy and happiness to friends and strangers alike and for showing grace, courage and strength in the face of terminal cancer. She died much too early, but she will always be in my heart.”

Childhood friend and fellow W graduate, Eloise Boswell Maxwell, remembers Bebe as, “being vivacious, enjoying life to the fullest, passionate about whatever she was involved in while always being a true and loyal friend. Bebe was driven and knew what she wanted out of life. She inspired me to be the most I can be.

Gloria Snowden Hillard became friends with Bebe while in high school as both were involved with the band. When they moved on to MSCW, Gloria always knew she could depend on Bebe as she was fiercely loyal to her friends. Gloria also enjoyed the fact that Bebe was always fun to be around. The two made the effort when Gloria lived in California and Bebe in New Orleans to get together each year when Gloria would visit her parents in Meridian. Gloria said Bebe’s smile and passion for life was always worth the effort.

These descriptions by Bebe’s friends, so aptly capture a life well lived and personify so many W alumni: smart, funny, loyal to friends and with deep-rooted passions for helping others.

Harry described Bebe as “a proud feminist, an excellent teacher, an organizer for the American Federation of Teachers and a social and political activist her entire life. She prided herself on being a Union Maid and a Yellow Dog Democrat to the end. She lived life to the fullest and was a dancer extraordinaire.” The accompanying picture is of Bebe leading a parade through her dearly beloved French Quarter in New Orleans, her home neighborhood until Katrina drove her north to Starkville.

As a teacher of 30 years, Bebe taught in public schools in Meridian, Luling, Louisiana, Washington, D.C., and Cincinnati, Ohio. She was a community activist, union organizer in Sacramento, California and Cincinnati, and a member of American Federation of Teachers, life member of the Freedom from Religion Foundation, and a lifetime member of the Women’s International League for Peace and Freedom. Bebe and Harry lived in New Orleans for 12 years, enjoying and loving the music, second-lining and diversity, and Bebe considered that wonderful city her spiritual home.

Harry and Bebe’s story began as children in their hometown of Meridian. They continued their story as he went on to Mississippi State to pursue an engineering degree and Bebe to Mississippi State College for Women to secure a degree in education. As was the tradition of the time, upon her pinning, Harry and his PI Kappa Alpha brothers came to The W campus to serenade Bebe for the joyous occasion, a precious memory for Bebe.

When Bebe was in the last days of her cancer battle, Harry arranged for current Pike members and a few other friends to serenade her once again outside her bedroom window, providing yet another precious moment in their lifelong story.

“Bebe always believed that education was extremely important if we Mississippians were to ever achieve our potential,” Harry said. “In fact, one of Bebe’s prized possessions is the certificate she received below for Outstanding Student Teacher in Elementary Education In 1965.”

From small town Mississippi to the Big Easy, Bebe lived life to the fullest and left her mark on many lives, both friends and students, by her example. The Bebe Roberts Freeman Education Scholarship will ensure her legacy continues.

To donate to the Bebe Roberts Freeman Scholarship, please go to give.muw.edu.