The 'Temple of Music' Reopens 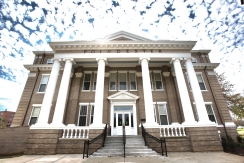 Since its construction, Poindexter Hall has hosted a President, two future-governors, and countless world-famous musicians. Now entering its second century, having just completed an extensive renovation, Poindexter returns to its rightful spot as the musical heart of our historic campus.

The thick, black cloud of smoke rising over the depot could easily be seen from Miss Poindexter’s flat on Third Avenue North, where she had lived for decades. She had traveled that route for years and knew exactly what stood past the depot.

On July 15, 1953, the four-story Shattuck Hall was burning. The fire was massive. Newspapers 400 miles away, in Kingsport, Tenn., would report the inferno on Mississippi State College for Women’s campus. The Biloxi Daily Herald would cover the story for months.

The retired Mistress of Music, now in her 80s, watched until she could no longer stand it. With a fire this size, the firefighters would certainly have no reason to worry about her beloved music hall, so she would give them reason.

Miss Poindexter rang for an ambulance to rush her the five blocks from her flat to the campus. From there she rushed inside, and headed for an upper floor. She knew that if her building was “occupied,” this fact would force the firefighters to keep the blaze from spreading from the nearby hall. 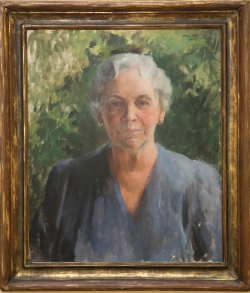 Miss Weenona Poindexter truly believed the newly named Poindexter Hall was her building, and she had every right to do so. After all, after Miss Poindexter had built the music department from a series of elective courses in 1894 in to the conservatory-style program similar to the ones she had studied at in New England. President Andrew Kincannon eloquently petitioned the state Legislature in 1903 for the funds to build the hall for the rapidly expanding music program. “With such a departmental building it would be an easy task to make Industrial Institute and College the center of musical, as it is already of industrial education,” he said.

In 1904, the famed Chattanoogan architect, R.H. Hunt, drew up the plans and began construction on the new Music Hall. The draftsman dubbed the hall “The Temple of Music” based on its neo-classical design, with the six imposing Ionic columns, elaborate molding, cornices and pilasters. Appropriately, at the center of the temple lay the sanctuary, an intimate concert hall to hold 200 guests and crowned with an oval skylight.

As the first load of bricks for the new Temple of Music arrived on campus, photographers were on hand to mark the event. Overcome with delight at the prospect this new building would hold, Miss Poindexter seized the building plans from the engineer and hopped up on the pallet to have her picture made.

In the 1905 edition of the Meh Lady, the students note:

“Ask Miss Poindexter why the Music Hall was built, and she would probably turn upon you with pity in her eyes, for such ignorance. Nevertheless, a joyous light would illumine her countenance as she answered ‘To fill a long-felt want; to provide fitting facilities for the development of the wonderful musical talent we have here!’ Mr. Kincannon’s answer would no doubt be different. With a shake of the head he would say, ‘Could I, as a gentleman refuse a lady a request? Imagine a hundred pleading with me! Why, my dear young woman, the Music Hall was built to gratify the teachers and pupils of our music department.'"

To mark the opening of the Temple of Music in 1905, Miss Poindexter would use her personal funds to invite world-renowned pianist Ignace Paderewski to perform on campus. The event drew such a large crowd that she made a thousand dollar profit, which Miss Poindexter used to invite other famed musicians to her hall.

The prestige of her building only grew when the recently-elected President William Howard Taft chose to speak from the front steps of the hall on a victory tour of the country in November of 1909. Taft stood with II&C president Henry Whitfield to show his support for the college’s mission. “A girl has the right to demand such training that she can win her own way to independence, thereby making marriage not a necessity, but a choice,” the President said. 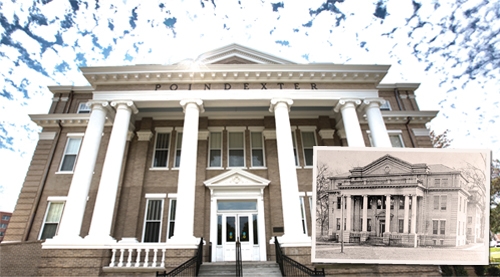 As the years went on, the college continued to expand. New buildings began to spring up on campus; II&C changed its name to Mississippi State College for Women in 1920 to better reflect the expanding number of programs. Presidents would come and go. One constant was Miss Poindexter and her Music Hall.

In the 1930s, the nation became lost in the grip of the Great Depression. Enrollment in the music program began to wane. The extra costs associated with the program, private lessons and the cost of instruments, made it difficult for all but the most affluent students. Soon, even the State of Mississippi was bankrupt. The college was forced to pay the faculty in “warrants,” IOUs that could be exchanged at a later date for cash. Many of the faculty members, including Miss Poindexter, were forced to live off their savings. After a year without pay, the faculty members had no money for rent and only a little for food. With only a few students now using the building, MSCW President Burney Parkinson and Miss Poindexter invited the faculty to use empty practice rooms on the upper floors of the hall as apartments until the end of the Depression.

All the while, Miss Poindexter was hard at work to have her program recognized by the National Association of Schools of Music. Miss Poindexter was able to reduce salaries of faculty and hire additional instructors. With the new staff, the MSCW Department of Music became the first fully accredited music program in the state.

In 1945, after 50 years of dedicated service to the college she loved so dearly, Miss Poindexter, at the age of 73, decided it was time to retire. In honor of everything she had done to build the Department of Music into a renowned conservatory, president Parkinson announced in 1947 that Miss Poindexter’s Temple of Music would bear her name. 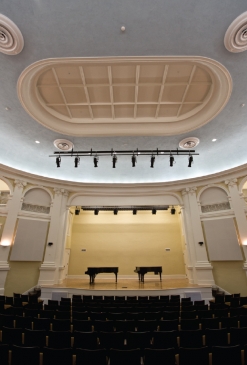 Poindexter Hall was spared from the flames that nearly destroyed Shattuck Hall in 1953, thanks to the aging Miss Poindexter rushing to her building’s aid.

Weenona Poindexter passed away on Feb. 17, 1956, following a long illness, but her legacy, her Temple of Music, continues on as the musical heart of the campus.

President Taft wouldn’t be the only political figure to use Poindexter Hall as a backdrop. On Oct. 28, 2003, Vice President Dick Cheney stood on the same steps during a campaign stop for Haley Barbour. Vice President Chaney noted, “It’s great to be back in a great state, and have an opportunity to visit The W.”
In 2007, as Poindexter Hall reached its centennial, the Mississippi Legislature appropriated $9.5 million in bond funds to restore the Temple of Music. In 2009, renovations began. Miss Poindexter’s hall would not only be restored, it would be fitted with the latest energy efficient materials and a state-of-the-art digital energy management system.

On Nov. 2, 2012, 103 years to the day since President Taft stood on her steps, Poindexter Hall was re-opened with a gala celebration and concert.

Now, entering its second century, Poindexter Hall will continue to shine as one of the most well-known and beloved jewels on MUW’s campus.