The W Remembers: 10 Years After Tornado 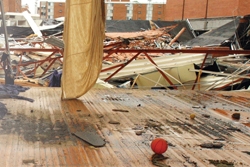 It went on record as the second-largest tornado outbreak ever experienced in the Eastern United States: 76 tornadoes reported in two intense days over 17 states. It was later known as “The Veterans Day Outbreak.”

In a cataclysmic few minutes early on a Sunday evening, Columbus—and MUW—were at the center of what would be remembered as one of the most destructive forces ever to descend on the Friendly City. The date was Nov. 10, 2002.

Like many before it, that Sunday afternoon on the historic campus was quiet and apparently normal. Students prepared for the end of the semester and thought about the upcoming Thanksgiving holiday. Faculty prepared to go into the home stretch of final papers, exams and grading. The campus was wrapped in a Sunday calm.

According to later reports from the National Oceanic and Atmospheric Administration, a supercell that formed just before 6 p.m. in Ohio and spread into Pennsylvania created a “northern” outbreak. Simultaneously, a “southern outbreak” spread the deadly tornadoes into Mississippi, Alabama and then into Georgia and South Carolina.

In Lowndes County, a tornado formed about three miles southeast of Artesia and worked its way across 22 miles of the county, bearing in on Columbus proper. In Columbus, a tornado warning was issued 19 minutes before the F3 tornado struck Main Street. In total, three tornadoes moved through Lowndes County between 7 and 8 p.m. that destructive day. The strongest struck downtown and nearby MUW at approximately 7:20 p.m., destroying dozens of homes, a church, and businesses and creating rubble of many
campus structures.

In a 2003 “Spectator” account on the one-year anniversary of the event, former student Rich Sobolewski (now MUW webmaster), recalled that he at first scoffed at the warnings to remain indoors and jokingly asked friends over an evening meal in Hogarth if a tornado could prevent a portfolio assignment that was due.

Seated in his residence hall moments later, however, Sobolewski felt his mood suddenly change. “I could hear the sound of scraping metal and pounding wind,” he recalled in the Spectator. He and a friend braved the elements to venture outdoors, where they discovered confusion, darkness and devastation. 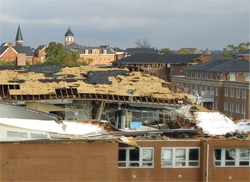 “I caught a glimpse of the art building, ripped to shreds,” he wrote. “I checked my car—all of the windows were smashed.” In their explorations of campus, Sobolewski and his friend were to discover what they heard another student observe: “On front campus it looked as though a storm had hit campus, but on back campus, it looked as though a bomb had gone off.”

Nora Miller, senior vice president for administration and CFO, remembers arriving on campus in the early morning hours Monday. “The sun was just coming up,” she recalled, “and there was an eeriness to the whole scene. It looked like a war zone.”

All around, she saw destruction. “There were pieces of roofing lying everywhere, limbs were down, trees were gone. One scene I’ll never forget is the curtains of the destroyed gym flapping in the breeze.”

In the midst of the mind-boggling disarray, she saw Dave Haffly of Dining Services sweeping up broken glass from Hogarth. “He had the coffee going,” she said. “We had hot coffee.”

For MUW, the damage was overwhelming. On campus, 26 of 60 buildings were damaged. The university lost complete use of two academic buildings and one residence hall for the Mississippi School for Math and Science. With debris everywhere and power outages to contend with, the university cancelled a week of classes. In assessing damages and costs, MUW leaders also made the decision that athletic programs would be discontinued.

That was the bad news. The good news was that the storm struck Sunday. Classes weren’t in session, and Pohl Gymnasium, one of the hardest hit at MUW, had closed at 7 p.m. In news reports the following day, the local Commercial Dispatch described the building as “a mountain of broken brick, shattered concrete and twisted steel.” The report went on to note, “Had the storm hit on a weekday, the gym would have been open and filled with people at the time.” 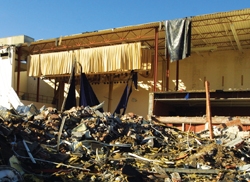 Through the fortune of timing, no lives were lost on campus; in fact, no one sustained injuries that required medical attention. And, through it all, the cafeteria never missed serving a meal. But the damage would require more than $22 million in recovery costs. The good news also was the willingness of state officials, neighbors and emergency agencies to respond quickly and decisively.

Both Miller and Perry Sansing, assistant to the president and general counsel, remember the outpouring of help from every source. “I remember how many volunteers there were,” Sansing said.

When he first arrived on campus Sunday evening, it was so dark that he had a hard time understanding the extent of the damage. In the light of the next morning, the wreckage was depressingly apparent. But, in the midst of that, he was encouraged to see just how many people were on hand to lend a hand. Lowndes Emergency Management, Columbus Air Force Base, the National Guard, local police, the Red Cross and many more all were at work, he recalled.

And local church congregations and even community members offered their help, Miller said. “There were individuals who came out to campus with their brooms and shovels just to do whatever they could.”

Declaring “The devastation and destruction on the campus of MUW is the worst I’ve ever seen,” then-Gov. Ronnie Musgrove pledged his help and immediately asked President George W. Bush to declare Lowndes County a disaster area. He was on site throughout much of the following days.

By Nov. 15, the disaster declaration had been issued, opening the door for federal assistance in the aftermath.

“With this approval, the people of Columbus and Lowndes County are going to be able to begin the process of rebuilding,” Musgrove said at the time.

Then-Sen. Trent Lott also was instrumental in facilitating funding for restoration, Miller said. “We had started a parking study shortly before the tornado, and that became a long-term master plan once we began to rebuild.” With IHL approval, the brick-and-mortar restoration got under way.

That process was sometimes years in the making. Pohl Gymnasium and the Stark Recreation Center opened three and a half years after the original structure was ravaged, and the Art and Design Building, home to the Eugenia Summer Gallery, had initial repairs completed in 2005. A formal dedication and reopening of the facility was held at the completion of all work in 2009. The tornado also created an opportunity to expand facilities for MSMS, and other facilities received new roofing and other needed repairs.

Out of disaster, The W proved its spirit and determination. From the rubble of twisted steel, broken glass, and toppled structures, from the broken pieces of a campus that sustained unprecedented damage, a new MUW emerged.

As it always had, The Long Blue Line moved forward.